How can the Union create a ‘single’ internal market out of ‘diverse’ national markets? To create an internal market, the EU Treaties pursue a dual strategy: negative and positive integration. The Union is first charged to ‘free’ the internal market from unjustified national barriers to trade in goods; and, in order to do so, the Treaties contain a number of constitutional prohibitions ‘negating’ illegitimate obstacles to intra-Union trade. This strategy of negative integration is complemented by a—second—strategy of positive integration. The Union is here charged to adopt positive legislation to remove obstacles to intra-Union trade arising from diverse national laws. For that purpose, the Treaties confer a number of legislative competences that allow the Union to ‘harmonize’ national laws in the internal market. The most general and famous provision here is Article 114, which entitles the Union to adopt harmonization measures that ‘have as their object the establishment and functioning of the internal market’. This chapter explores the Union’s negative integration tools in the context of the free movement of goods, while the next chapter investigates the Union harmonization competences.

What is the ‘negative integration’ regime governing goods? In order to create an internal market in goods, the Union insists that illegal barriers to intra-Union trade must be removed. Its constitutional regime is, however, split over two sites in Part III of the TFEU (see Table 9.1). It finds its principal place in Title II governing the free movement of goods, which is complemented by a chapter on ‘Tax Provisions’ in Title VII. Within these two sites, we find three important prohibitions. Section 1 examines the prohibition on customs duties. These are fiscal duties charged when goods cross national borders. Section 2 moves to the second type of fiscal charge: discriminatory taxes imposed on foreign goods. Section 3 then investigates the legality of regulatory restrictions to the free movement of goods. Regulatory restrictions are not, unlike fiscal duties, pecuniary charges. They simply ‘regulate’ access to the national market by—for example—establishing product or labelling requirements. Finally, Section 4 will look at possible justifications for regulatory restrictions to trade in goods. 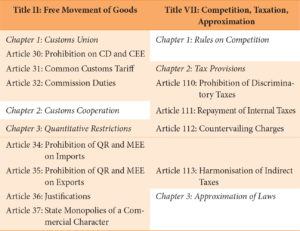 Table 9.1 Treaty provisions on the free movement of goods (included with permission of Oxford University Press)