Apart from goods, the EU Treaties also aim to guarantee the free movement of persons. This constitutional choice for an internal ‘market’ in person was originally informed by an economic rationale. For the second fundamental freedom had been created to assist people wishing to work in another Member State and was consequently confined to economically active persons.

The Treaties thereby distinguished between two classes of economic migrants, namely employed and self-employed persons; and today’s Treaty title dealing with persons still addresses ‘Workers’ and the ‘Right of Establishment’ in two separate chapters. Each of the two chapters thereby contains a central prohibition that outlaws restrictions to the free movement of persons and which covers both ‘import’ restrictions as well as ‘export’ restrictions that persons may face when wishing to move from one State to another. Both chapters also contain a number of harmonization competences for the Union. These competences have been widely exercised in the past; and for this reason, European law on the free movement of persons is a rich mixture of primary and secondary law.

With the 1992 Maastricht Treaty, the two special chapters on persons were complemented by the general rules on EU citizenship; and the introduction of EU citizenship partially cut the economic link that was traditionally required for EU free movement rights. Article 20 TFEU now grants every European citizen the ‘right to move and reside freely within the territory of the Member States’. This general movement right is a residual right: it must ‘be exercised in accordance with the conditions and limits defined by the Treaties and by the measures adopted thereunder’. And, unsurprisingly, there has therefore been a complex relationship between the two specific sources of free movement rights and the EU citizenship provisions (Table 11.1). Their symbiotic relationship is particularly embodied in the ‘Citizenship Directive’. 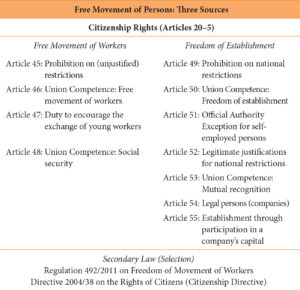 Table 11.1 Treaty provisions on the free movement of persons (included with permission of Oxford University Press)