The protection of human rights is a central task of many modern constitutions. Fundamental rights are here designed to set protective limits to governmental power(s). This protective task is principally transferred onto the judiciary and involves the judicial review of governmental actions. The protection of human rights may be limited to judicial review of the executive. But in its expansive form, it extends to the review of parliamentary legislation.

The European Union follows this expansive constitutional tradition. It considers itself to be ‘founded on the values of respect for human dignity, freedom, democracy, equality, the rule of law and respect for human rights. Human rights are thus given a ‘foundational’ status and constitutionally limit the exercise of all Union competences—including its legislative competences.

What are the sources of human rights in the Union legal order? While there was no ‘Bill of Rights’ in the original Treaties, three sources of European fundamental rights were subsequently developed. The European Court first began distilling general principles protecting fundamental rights from the constitutional traditions of the Member States. This unwritten bill of rights was inspired and informed by a second bill of rights: the European Convention on Human Rights. This external bill of rights was subsequently—and thirdly—matched by a written bill of rights specifically for the European Union: the EU Charter of Fundamental Rights. These three sources of European human rights are now expressly referred to—in reverse order—in Article 6 TEU: 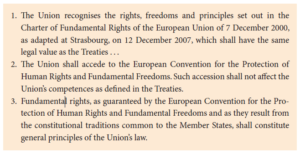