When a sovereign parliament legislates, it need not ‘justify’ its acts. It is considered to enjoy a competence to do all things. This ‘omnipotence’ is seen as inherent in the idea of a ‘sovereign’ State. The European Union is however neither ‘sovereign’ nor a ‘State’. Its powers are not inherent powers. They must be conferred on it by the Member States in the European Treaties. This constitutional principle is called the ‘principle of conferral’. The Treaty on European Union defines it as follows:

What are these material fields in which the Union is entitled to legislate? The Treaties do not enumerate the Union’s competences in a single list. Instead, the EU Treaties pursue a different technique: they attribute legislative competence for each and every Union activity in the respective Treaty title dealing with that activity. Each policy area contains a provision—sometimes more than one—on which Union legislation can be based. The various ‘Union policies and internal actions’ are set out in Part III of the TFEU (Table 3.1).

The Treaties here present a picture of thematically limited competences in distinct policy areas. This picture is however—partly—misleading. Three legal developments have significantly undermined the principle of conferral in the past; and these three developments have led to widespread accusations that the European Union’s competences are ‘unlimited’. What are they? First, there has been a rise of teleological interpretation, which will be discussed in Section 1. The Union’s competences are here interpreted in such a way that they potentially ‘spill over’ into other policy areas. This ‘spillover’ effect can be particularly observed with regard to a second development: the rise of the Union’s general competences. For in addition to its specific competences in specific areas, the Union enjoys two very general legislative competences that horizontally cut across the various policy titles within the Treaties. These two competences are Articles 114 and 352 TFEU and will be discussed in Section 2. Lastly, there is a third development that would qualify the principle of conferral significantly: the doctrine of implied external powers, which will be analysed in Section 3. 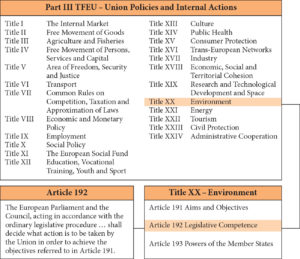 Importantly, not all Union competences thereby allow the Union to act to the same degree. Indeed, depending on the type of competence involved, the Union may or may not be permitted to interfere with national choices. What types of competences are thus recognized by the Treaties? Different competence categories were originally ‘discovered’ by the European Court of Justice, and the EU Treaties have today codified them. These competences categories will be discussed in Section 4.